The Range was very much the 'Heart of the Home' 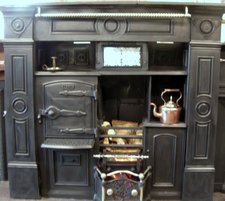 In 1780, Thomas Robinson (an iron-monger from Whitechapel in London) patented the first known design of an early ‘open’ Georgian cooking range made from cast iron.  Although there is evidence to suggest that early iron foundries produced what was known as ‘beehive ovens’ , due it’s shape of the cavity in the  wall. Prior to this cooking was done over an open wood fire, which often resulted in the hanging cooking utensils covered in with soot, inevitably effecting the taste and look of the food prepared using the fire.  However, the range fire was still open fire, but a ‘bottle jack’ was invented to this allow the meat to be hung above the fire and turned to allow more even cooking.

Joseph Langmead, an Iron Founder in London, patented this first type of Range with the addition of a hot water tank in 1783, as well as the oven on the other side. The boiler was a vast improvement on previous methods for heating water, which had been made of copper or iron and were portable and heated over an open fire. The simple boiler attached to these ranges were fitted and filled and emptied through the top lid. Later models provided a tap on the actual front of the range itself. Although this was clearly an improvement to cooking on an open fire, it had its problems. The food often cooked unevenly and could burn easily on the side which was nearest to the fire. Controlling the temperature inside the oven could also be a problem and would obviously depend on keeping the fire burning hot enough to not only provide cooking facilities, but also hot water and heating.  Improvements were made with the addition of a flue around the oven, controlled by ‘dampeners’ allowing the hot air to manually be drawn through the flue or closed down.

Some open ranges were manufactured without a water tank and only an oven, the other side of the range was as blank panel referred to as a ‘sham’. Huge logs could be added to the Range last thing at night to allow an open fire to be kept going for weeks on end. The fire in the kitchen range was usually out by morning, so it had to be cleaned; black leaded and re-lit before any heat or cooking could be done. Of course if you were a rich family it would be the task of the servant to do it. In poor families this would be the task of the housewife or the children to help.

For the next century, these ranges became a familiar sight in every home and the development of the open kitchen range became commonplace for the next 100 years. Although earlier on these types of ranges tended to be more common in areas with coal mines. ‘Yorkshire’ ranges manufactured by William Thomlinson as early as 1820 and were called the infamous ‘Albert Kitchener’ (Kitchener range). These were identified by their oven set at the same level as the grate. However this was not introduced until 1860 to the open market. In the days before under floor and gas central heating, the range was relied upon to keep the house warm and also with providing all the cooking needs, this made the Range very much the 'heart' of the home.

Iron foundries often indicated the town which it was manufactured on the plate displayed at the front of the range. London was the centre of range manufacturing by 1800. It was common to find foundries in Midlands, South Yorkshire and Scotland.

Gas stoves were invented as early as 1820, but did not become a commercial success until  the 1880's due to slow development of commercial gas pipework, see below for information about Aga one of the early gas stove manufacturers still around today.

Kitchener circa 1829, an oven on both sides, often no hotplate but a shelve in which to set a pan or a kettle on. (William Flavel patented this design)

Herald Range, medium sized, with shelve and hot water tank on the other, flue traps at the top, to draw in air.

Excelsior – medium sized range with oven and hot water tap, with ‘hood’ over the fire and hotplates. Flue doors on the back panel to draw in air.

‘Urban’ or Manchester Range a small range with no hotplates and small oven plus plate rack. Flue doors at the back to draw in air.

Yorkshire Range, oven on one side, sometimes tiles on the front, medium in size.

Eagle Range, often very large, common in larger homes with several hotplates. Some models have tiles on the back panel.

Portable Range design was thought to come from America, hence it sometimes being called American Stove. There was a fire at the front as well as oven and hot water at either side. There was a closed hood with a pipe leading up to the chimney cavity. They would be placed in the aperture where the old fireplace used to be. Common makes are Larbert, Belle Portable and Beetonette.

One of the most famous and common of these type of cookers are the Aga/Rangemaster cooker (see opp for illustration) invented by Dr Gustave Dalen in 1929. These  were (and still remain) very expensive.  They were enameled cast iron available in various colours. Esse also manufacturer a cooker call the ‘ironheart’ which is as close to the portable range as possible. These have been used on the Channel 4 programme, The River Cottage. In addition to using solid fuel, gas, and oil electric are also used. Shorlty after the second world war a very early mircowave was invented.,using radar technology called the 'Radarange'.  This worked by bombarding food with electromagnetic radiation in the microwave spectrum causing polarized molecules in the food to rotate and build up thermal energy in a process known as dielectric heating. These were too large and expensive to be used in the home unti 1967, when the first counter top was invented. These were still expensive and it was not until the 1980's that the mircowave became cheaper and  therefore more commonplace.  Unlike conventional ovens, microwave ovens usually do not directly brown or caramelize food, since they rarely attain the necessary temperatures to produce Maillard reactions and occasionally result in certain foods taking on a 'rubberised' effect.  Hence gas , electric, solid fuel and oil cooking appliances are still used, to produce food which is more appetising.  In the future who knows? we could be producing food using nanotechnology!

For further reading we recommend purchasing a copy of this book, Firegrates and Kitchen Ranges by David J Eveleigh

To discuss your ideas and aspirations, in installing cast iron antique range in your home.  Or if you are a film, TV or Museum , we can hire these to you*. We have provided ranges to BBC TV, Various castles and musuems, throughout Britain.

We are available 7 days a week 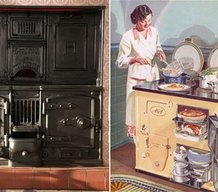